“If Perth is the heart of Scotland then Dundee must be the armpit” said someone at a meeting I attended some years ago in Perth. Though I forcefully disagreed, the comments were reflecting disgust at a historic waterfront that was bedevilled by unsightly concrete blocks, a rotten ring-road and a railway station that served more as a warning, than a welcome, to visitors. It definitely fell short of what William McGonagall once described as “beautiful scenery along the banks of the silvery Tay.”

With a population of 148,270, Dundee is Scotland’s fourth city and was historically known for jute, jam and journalism. At its height, the jute industry employed over 40% of the able workforce in Dundee. However, in the early 20th Century, the jute industry was gradually exported to India and the last mill closed in 1970. This ushered in a period of rabid de-industrialisation and manufacturing malaise leading to increasing levels of deprivation and poverty that has captivated the city ever since.

The long-term net effect being that Dundee has topped several European tables for everything from underage teenage pregnancy to unemployment and alcohol and substance misuse. So, how has this coastal city emerged from the ashes of a large-scale demolition project with a new found status as the “coolest little city in Britain” – according to GQ magazine – and become one of the Wall Street Journal’s Top 10 “hot destinations” while casually submitting a bid for the European City of Culture?

I met Mike Galloway, who will soon retire as Executive Director of City Development, to talk about the city’s journey from austerity to prosperity. He was born into a working class household in Glasgow’s east end before moving to Dundee to study town planning. His career has seen him preside over regeneration projects in Glasgow, Manchester and London but he says he fell in love with Dundee to a greater extent than the crumbling city where he studied and then promptly left in the 1970s.

Galloway has been described by local press as the mastermind behind the waterfront regeneration but he denies this. He says: “When I came back to Dundee in 1997, we did a city-wide audit and spoke to people across the city.” He states: “Rather than develop a plan we liked and seek their approval, the people owned the process by offering their input into the construction of the masterplan which, when presented back to them at community centres across the city, gained well over 90% approval.”

The masterplan, as Galloway describes it, is a 30 year vision which is only two thirds of the way towards completion. However, when the regeneration was approved in 2000, the Scottish Parliament was just establishing itself. He says: “They were talking a lot about the future of Scotland’s success being rooted in the cities and were looking for ways they could unleash that potential.” One of the creations was the City Growth Fund, which Dundee successfully applied for on four separate occasions.

Unlike other beneficiaries of the City Growth Fund that chose to spread resources more widely to keep everyone happy Dundee, by contrast, decided consistently to invest in one single project and councillors unanimously agreed that it would be the waterfront. Galloway also states that the journey has been “a real partnership effort” and name drops not only the Scottish Government and Dundee City Council, but also Scottish Enterprise and the Heritage Lottery Fund among notable benefactors.

The regeneration has certainly not emerged without creating consternation at different ends of the economic spectrum. At the higher end, I remember a friend and employee at the Hilton Hotel, who was responsible for signing off on £2 million worth of renovation only weeks before being informed that their 25 year lease agreement would not be renewed. Their building was due to be demolished to make way for a new structure which turned out to be the new Victoria and Albert Museum.

And, at the lower end, I met someone with a robust CV who turned up at Dundee foodbank after losing his well-paid job as the head chef of an establishment based on the site of the newly-erected Slessor Gardens, which has already been host to many high-profile open air concerts. He has struggled to secure new employment and said: “While there is a lot of talk about new jobs coming to the city and offering folks a good livelihood, I have lost my own livelihood on account of this regeneration.”

However, Galloway is at pains to highlight the importance of job creation through new retail and business ventures. He has also received many complaints over the controversial steel structure on site six which currently towers over the illustrious V&A Museum. He is composed about the fact, though, that the “unpleasant looking steel structure we currently have is a far cry from what will soon be an aesthetically-pleasing limestone building. I would simply say to critics – ‘just wait and see!’”

He also appears as passionate about the regeneration of the individual as the environment and highlighted his stipulations for any new businesses that want to land on the newly-refurbished waterfront. He says: “I make it clear to any interested businesses that, first, they must prioritise the employment of local people and, second, they must pay the real living wage.” He goes on to say: “For me, the presence of a real living wage for local people is as important as the V&A itself.”

It is also clear that the opening of the V&A on Saturday 15th September is just one among a number of forthcoming developments but, with retirement only a fortnight away, I wonder if Mike Galloway fears that Dundee will ever slide back into economic degeneration. He says: “My greatest fear would be that someone else, 70 years from now, has to do this all over again.” He concludes: “This is when Dundee really needs to hold its nerve. The city is at a tipping point but the best is definitely yet to come.” 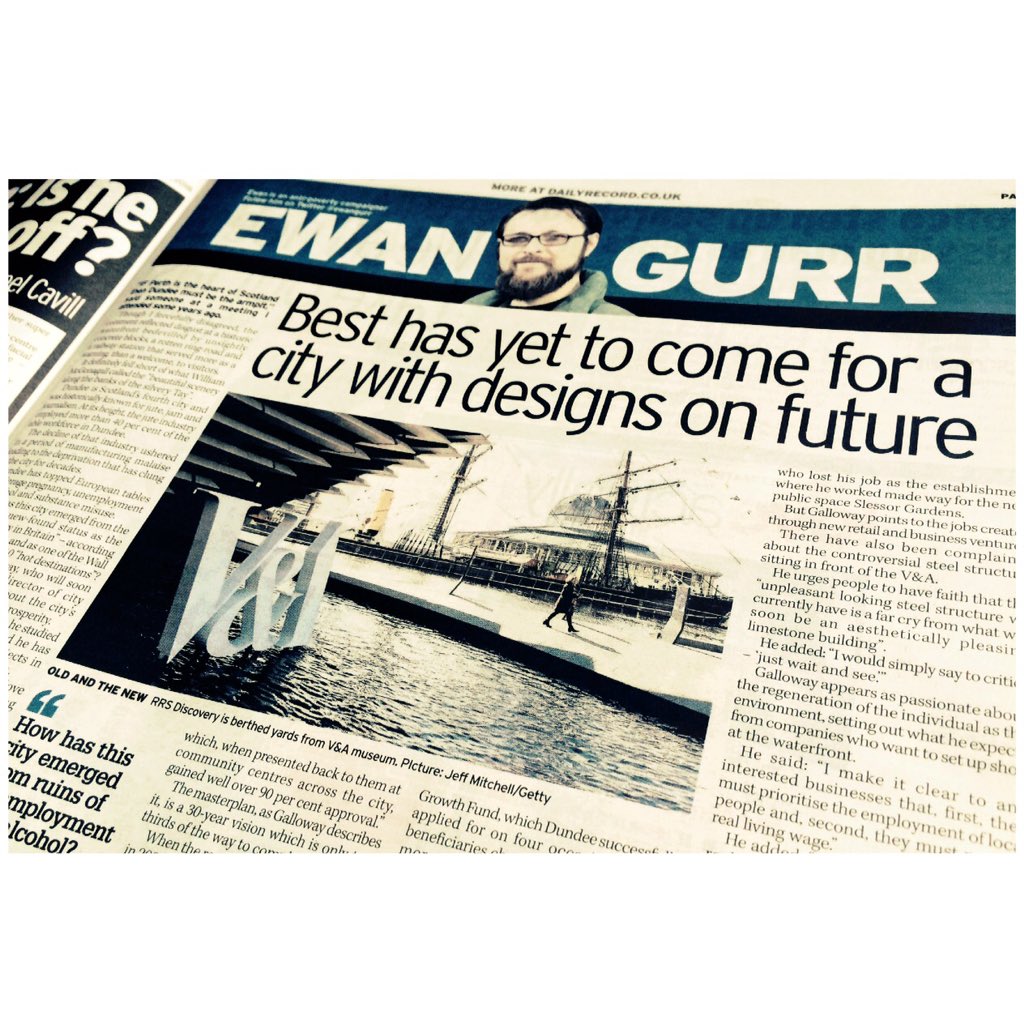