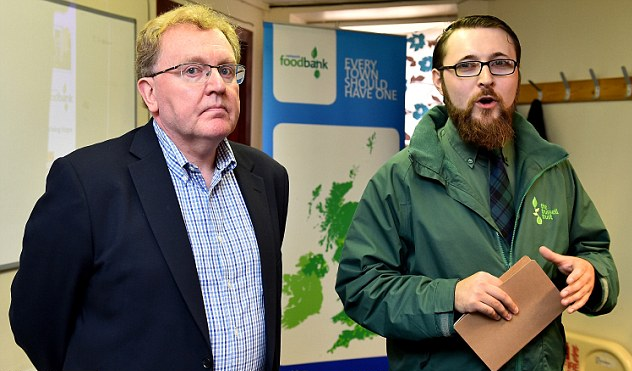 The Neighbourhood Food Collection has become a staple in the diet of the healthy foodbank. The partnership between Tesco, The Trussell Trust and Fareshare takes place in the first week of December and enables customers to support their local project through the busiest time of the foodbank calendar. However, it became a PR nightmare this week when several Conservative politicians, responsible for backing legislation that increases the need for foodbanks, participated in the collections.

I have only ever received a death threat once in my life. It was July 2015, I was leading The Trussell Trust in Scotland and we were about to launch Dumfriesshire foodbank, which sat on the border between the constituencies of both a re-elected Conservative Member of Parliament and a newly-elected Scottish National Party MP. It was one year after the Scottish independence referendum and two months after the General Election, which transported 56 out of 59 SNP MPs into Westminster.

At the time, the political temperature in post-referendum Scotland was close to boiling point and invitations to the foodbank opening were issued to the SNP MP for Dumfries and Galloway and the, then, only Conservative MP, David Mundell, who represented Dumfriesshire, Clydesdale and Tweeddale. I received no response from the SNP MP but Mr Mundell duly accepted and, on the day of the opening, his participation was accompanied by 150 protestors with placards and potatoes.

I had flashbacks of that day this week when I observed the outpouring of derision toward former Cabinet members Dominic Raab and Iain Duncan Smith making appearances at their local Tesco, the latter being the architect of the most destructive welfare reform legislation since the birth of social security. And I understand the outrage given the pressures the Welfare Reform Act has foisted upon families since 2013 via the bedroom tax, the rape clause, increased sanctions and Universal Credit.

However, it is precisely because of the devastation I have observed that I believe we need to decrease the divide between the people creating the policy and the people experiencing the poverty. Following the outpouring of public outrage, The Trussell Trust’s Garry Lemon, promptly issued a public response, which stated: “As a charity, we work hard to engage with politicians of all parties to make sure that they recognise and understand the issues people referred to foodbanks face.”

While I agree with engaging elected members of all political stripes with the work of foodbanks, I have always disagreed with inviting elected members to foodbank collections and it is important to realise that these are separate issues. Food collections do not engage our policy-makers with the pain problematic policies cause people experiencing poverty. Instead, they feed the Conservative notion of Cameron’s much lauded Big Society that generosity is an adequate response to austerity.

Visiting foodbanks on open days, meeting the people who use them, talking to the volunteers and even, yes, attending an opening each create a platform to engage these important and influential discussions. These events commiserate, rather than celebrate, the crises that create a climate of chaos for children before Christmas, especially when Universal Credit is undergoing its final phase of rollout in cities like Aberdeen where one of its chief apologists, Ross Thomson, attended his local Tesco.

On the day I invited Mr Mundell to participate in the opening of Dumfriesshire foodbank, we talked openly and frankly about the Welfare Reform Act. Away from the cameras, the newspapers and the spotlight, we talked about the policy and the process and I shared the story of a mum who had to give up breastfeeding her new born because she had so few calories due to an unfair benefit sanction and a father who attempted to take his life after a 14 per cent deduction to his Housing Benefit.

It is also important to remember independent foodbanks who lack the backing of Tesco and, at Christmas, we cannot play fast and loose with the good graces of the public. Foodbanks are sustained by public generosity but for many that act is also a form of protest against policies that create poverty. Behind these volunteer-led initiatives are heroes running operations on a shoestring and busting a gut to ensure children are clothed, heated and fed during winter. And this is the real nightmare before Christmas.

One thought on “The Foodbank Nightmare Before Christmas”