This article appeared in the print edition of the Evening Telegraph: 29/04/2019 [Online], Available: https://www.eveningtelegraph.co.uk/fp/ewan-gurr-dundee-mp-says-timing-is-right-to-reconsider-independence/   [Accessed: 2019, Apr 30] 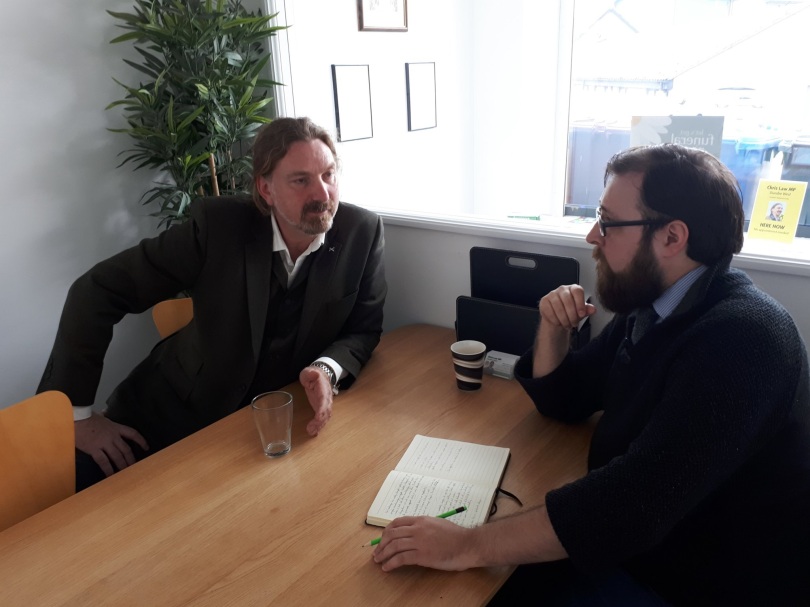 I revealed a fortnight ago in these pages that I voted for independence in 2014 and, then last week, to leave the European Union in 2016. So it was fascinating to see Nicola Sturgeon announce last Wednesday her intention to work towards another independence referendum because of Brexit. Last Friday, I met with the Member of Parliament for Dundee West, Chris Law, who has been my constituency MP since 2015. Chris returned to the House of Commons last week after the Easter recess and I was keen to meet with him to discuss a variety of issues and find out his reaction to the announcement made by his leader just two days earlier.

Chris said: “I think the timing is right to reconsider the question of independence for a range of reasons. We face the likelihood of Euro elections at an international level, Brexit is at an impasse at a national level and the issue of EU citizenship is constantly emerging at a constituency level.” However, the polls indicate support for the First Minister’s announcement stands at only 20% and support for independence remains stubborn at around 40%. Chris says: “The landscape has changed since 2014. The big shift is among EU citizens who worried that independence may unsettle their status but Brexit has since done just that. They are now coming to us in large numbers.”

Assuming for a moment Scotland did become an independent nation, there appear to be several barriers that would prevent EU admission to Scotland. Firstly, the EU would only admit a nation who secured independence by constitutionally-agreed means, which would require Downing Street to issue a Section 30 order which they rejected in 2017. Secondly, if 27 member states were to grant a newly-established independent nation access, it would amplify the virtue of other independence movements across Europe. And thirdly, would it not almost inevitably lead to our accepting the Euro, a weaker currency than the one we currently use?

Chris says: “Article One of the UN charter affords us the right to self-determination. The refusal of a Section 30 order would just be stubborn. Furthermore, as an existing member state for over 40 years, there is a great deal of good will towards us from the EU and, finally, there are a handful of other nations that retain their own currencies.” Having observed the challenges in Westminster over the dissolution of a 46 year relationship, I ask Chris if he has ever had a wobble on independence at the thought of the dissolution of a 312 year relationship. “I am certainly more informed, but I still believe the opportunities for Scotland far outweigh the challenges.”

Time will tell if his vision of independence will be realised, let alone permitted another vote.