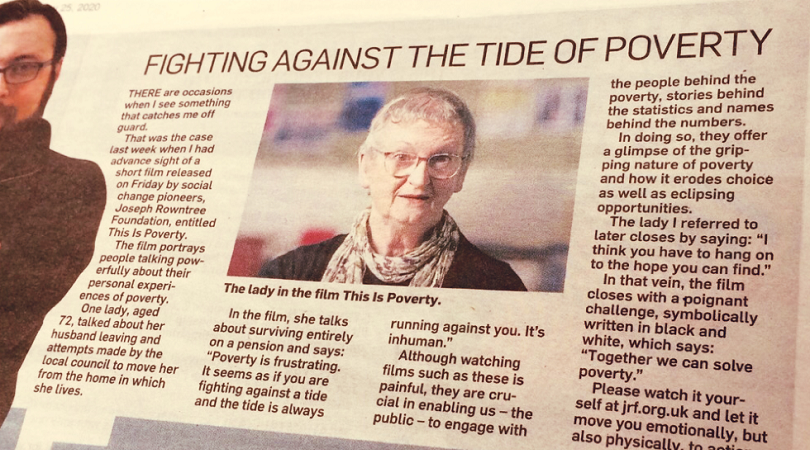 These following 200 word short supplements appear exclusively in the print editions of the Evening Telegraph every Monday in May.

There are occasions when I see something that catches me off guard. That was the case last week when I had advance sight of a short film released on Friday by social change pioneers, Joseph Rowntree Foundation, entitled: ‘This is poverty’. The film portrays people talking powerfully about their personal experiences of poverty.

One lady, aged 72, talked about her husband leaving home and attempts made by the local council to move her from where she lives. In the film, she shares about surviving entirely upon a single pension and says: “Poverty is frustrating. It seems as if you are fighting against a tide and the tide is always running against you. It’s inhuman.”

Though watching a film like this is painful, it is crucial in enabling us – the public – to engage with the people behind the poverty, stories behind the statistics and names behind the numbers. In doing so, they offer a glimpse of the gripping nature of poverty and how it erodes choice as well as eclipsing opportunities.

The lady I referred to later closes by saying: “I think you have to hang onto the hope you can find.” In that vein, the film closes with a poignant challenge, symbolically written in black and white, which says: “Together we can solve poverty.” Please watch it yourself at jrf.org.uk and let it move you emotionally, but also physically, to action.

I last spoke with former Glasgow North East MP Paul Sweeney last October in the same week the House of Commons voted to hold a General Election in December 2019. Paul was the only elected member in Glasgow to lose his seat that night having won it two years earlier from SNP MP Anne McLaughlin, who then regained it.

Our dialogue related to a shared concern about poverty but, in an ironic twist, Paul courageously opened up last week about his own personal experience of applying for Universal Credit. The basic annual salary for a Member of Parliament is £81,932 but the basic rate for a single person aged over 25 on Universal Credit is £409.89 per month.

Describing his deselection as akin to “a public execution”, Sweeney told the BBC that the labour market had ground to a halt due to lockdown and there are few available employment opportunities. He added: “There is no shame in having to resort to social security. It is there for everyone regardless of how prestigious their jobs were.”

Having experienced redundancy myself and relied upon the mercy of the state, I commend Paul for making himself vulnerable by sharing his experience and reminding us what social security that William Beveridge envisaged sought to do, which is to insulate people from poverty and propel them back to prosperity.

Professor Neil Ferguson resigned from his role on the UK Government-convened Scientific Advisory Group for Emergencies (SAGE) last Tuesday after it emerged he broke the social distancing rules he was instrumental in convincing ministers was vital to the saving of British lives.

It was revealed ‘Professor Lockdown’ met a married woman only two weeks after he himself tested positive for Covid-19. The news also emerged one month on from the resignation of Dr Catherine Calderwood, the former chief medical officer for Scotland, who visited her second home after lockdown measures were implemented.

What is it with our medical professionals and their second homes, second lovers, sense of entitlement and questionable judgement, you might ask? However, the more alarming revelation is that while Professor Ferguson’s private life took centre-stage, it eclipsed the news concerning our record-breaking coronavirus-related death toll.

This was additionally disturbing given Ferguson’s activities took place over a month before the news that the United Kingdom had overtaken Italy, recording the highest number of Covid-19 deaths in Europe and second highest in the world.

While I do not condone Professor Ferguson’s behaviour, I am not sure it merits resignation and I am concerned by the consistent loss of expertise during the biggest UK public health emergency in living memory as non-governmental professionals undergo a level of public scrutiny they are neither trained for, nor used to.

Throughout my life, I have disagreed with many and disliked some but do not think I can say I have ever hated anyone. The SNP can now resolve that question with their authoritarian new Hate Crime Bill, which carries a maximum seven year jail term for anyone who stirs up hatred or insults anyone on the basis of age, disability, religion, sexual orientation, transgender identity or ‘variations in sex characteristics’.

The intent of the legislation proposed by the Cabinet Secretary for Justice, Humza Yousaf, is not in question because hate is not pleasant for anyone who has ever been on the receiving end of it. However, the Bill targets those who possess ‘inflammatory material’ or employers who fail to report those who promote it. Could we eventually see a church minister prosecuted for failing to officiate a same sex wedding, a history student penalised for purchasing a copy of Mein Kampf for an essay on World War II or Frankie Boyle being hauled before a judge for hurting the feelings of a paedophile?

Currently, Scotland’s two biggest SNP-led councils are being taken to court over the alleged suppression of freedom of speech and dialogue concerning the postponed Gender Recognition Act is expected to become more intense. The Scottish Government could not have selected a worse time to propose this Bill if they tried.